most of the turning points of my life have been serendipitous.

five days ago, i was approached by a colleague at work, who said she needed some help, and wanted to know if i was up for it. we agreed to meet by the coffee machine a couple of hours later, and she pitched her case: there was a hackathon coming up this saturday, and her team had just disintegrated. and they had an idea.

the idea appealed to me. it was one of those things that seemed like it could be done. in fact, as she was describing what she wanted to do, i could literally see it take shape.

i went home that night, and fired up my IDE. it was 2 years behind the times, but ran. logged in to heroku, which i had again signed up for two years ago. it's still free.

i was up till 1:30am that night. just writing random stuff. a hello world REST service that logged its source IP and facebook click ID in a Postgres database that could be edited by strange and funky REST calls.

the next day, the old team regrouped (kinda). it seems that everyone was suddenly convinced again that this is something we should do. i carried my notepad along, scribbled some notes, and took a photo of them before i left office. i couldn't wait to get home, to start writing some real code, which i did: a RESTful service to signup and login. took me all night again.

thursday morning, i had a late start to work as I was expected to work late. not sure what I wrote (I could check my git log, i guess) but i was definitely writing code and pushing it, hitting refresh on my browser. finished work at 10pm, and was back to hacking away. refactored all my code, added the capability to run against an in-memory data store so that I don't mess up the DB with my silly CURL commands.

by friday morning, i felt like a zombie. but i managed to get work done, attend meetings and all that. when i got a call from Shruti at 8pm reminding me that she had been waiting at the restaurant for 15 minutes (I had not left office yet), I knew I was pushing it.

I didn't touch my computer that night. just got home, and crashed. or maybe i did touch the computer, because how else did i sleep at 1am if dinner was done at 10:30pm? it's all a blur now.

either way, i slept through my alarm. went from bed to the door in 15 minutes (breakfast at the hackathon, thank goodness for little mercies!).

laptop plugged in, raring to go. met my team, who had mostly arrived before me.

presentations and introductions out of the way, we got started... and stopped. kinda.

technical glitches (the one person who was going to write the UI had a laptop that REFUSED to see the specific wifi we were supposed to use!), another teammate who was supposed to do the presentation had never actually launched powerpoint on her laptop and suddenly realized her laptop does not even have it, and another teammate had an ipad with a remote connection to two freshly paid for amazon cloud servers, that had... nothing. ok, they had had notepad, so it could be used as a glorified text editor. the ipad might have done a better job i guess. as we worked around our technical glitches, general picking away at the problem ensued, until it was about 2pm. at that point we realized we had to change tracks drastically.

the server (aka my code) was ready and running full steam on the cloud, waiting for all the requests it was built to handle... and it kept waiting (it still is waiting, for the record).

everybody was doing their own thing, and we were kinda getting nowhere. i was too demotivated to even try hitting my code once to verify it worked. we abandoned all IDEs. our new strategy was to just do mockups of everything. so we huddled around a flip chart, drew all our screens, then ripped them off, scattered them on the floor (for some reason!) and proceeded to transfer them to the computer. i'm not sure how i contributed at that point besides hovering around, wringing my hands helplessly and possibly gulping large amounts of caffeinated sugar free sodas. it was 5pm before we knew it, and pizza was served. i didn't care. at 5:15 we got to know that we'd be given 5 minutes to present everything. and this was after i was somehow convinced my teammates we'd be given half an hour or something (it was planned to end at 8pm, so we'd have two and a half hours which i assumed would be used entirely for presentations, i assumed there were half as many people around, and i was obviously too caffeinated to do proper math)

and so, while everyone was moving towards the presentation area, i hit ctrl + D on the terminal window that had all my curl commands preped up, and replaced the slide that said "DEMO" with a screenshot of my IDE and the text "COMING SOON" in 96 point bold.

we still managed to get a "highly commended" award, which I think, given the above, is definitely something! 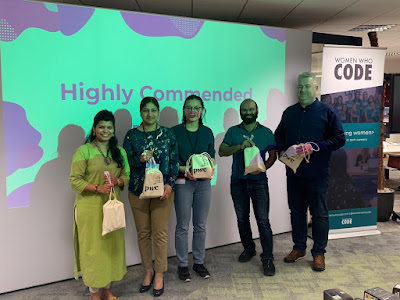 i'm in hackathon-afterburn mode. trying to install node.js on a Linux emulation layer on my 8 year old android tablet at 2am because... why not.

it feels good to be part of something good.
at March 08, 2020
Email ThisBlogThis!Share to TwitterShare to FacebookShare to Pinterest
Labels: current, geek, living the dream, my life, office, photo, tech, web