the weirdest way to pack

yesterday, I was contrasting our last trip to the UK with this one:

a year ago, we booked our flights, then got our visa... and then did nothing for a month. packing was started 3 hours before we left for the flight, and finished half an hour before we did. there was no time to make a packing list, let alone check it.

yesterday, on the other hand, we were done packing a full 12 hours early. we were so free, that we packed one bag a day and had the last day reserved for weighing and reorganizing bags. but the biggest contrast is that, we started packing 2 months ago. well before we even applied for the visa or even had a date. and in fact, there was still a doubt whether we were actually going at all.

and now, over 90% through our flight (the seatbelt sign has just come on), I just realized that I had a packing list that I completely forgot to check! luckily, I could tick off every single item on the list other than the one thing I intentionally decided to leave out.

life just has its own way of getting stranger and stranger (in a beautiful way) after every twist and turn. 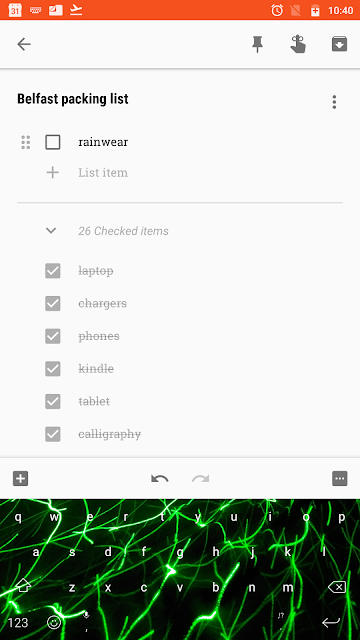 at June 18, 2018 No comments:
Email ThisBlogThis!Share to TwitterShare to FacebookShare to Pinterest
Labels: moBlogged, my life, photo, self realization, travel, vacation

the decision to move is a strange one. for most of my life, I assumed that I will never move. I loved my city, my locality, my home. whenever anyone brought up the thought of moving, I had a score of reasons to justify not wanting to.

the first move was pretty simple. it was time to move out of my parents home. and though I loved the locality (and still do!), the commute was killing. and the move was not too far off. pretty much halfway between my then home and office. and it was pretty smooth. I moved in two steps: first, the minimum stuff that I needed to be able to live in the new home, and then the day I actually moved, two bags of my clothes and stuff.

adjusting to the new place took longer, but it wasn't just about changing location: it was mainly about moving out from my parents home, and it was also about adjusting to living with my wife.

a few months later, it felt like we were settled in. we had moved with the intention of staying put for a fair amount of time, and we had planned it accordingly, with no stop-gap measures. and then came an unexpected career opportunity. although we had plenty of time to think about it after the decision, the decision was made on the spur of the moment. we decided to take the leap. and surprisingly, although the cause was the career opportunity and the effect was the move, it sometimes feels like it was the other way around.

as a friend was saying the other day, unexpected opportunities do not happen by accident. you have to work, consciously or subconsciously, towards enabling them. it could networking, keeping "a ear on the ground", or just giving luck a free hand by keeping an open mind.

and so, this move seems almost predestined, despite not being so. it's a move of a lot larger magnitude than anything we've planned or done before, although there are literally scores of friends who have done a similar move, (I'm assuming) successfully. and they've all done it in one go. planning, taking their chances (calculated and uncalculated), and taking the leap of faith. of course, there are the countless people who refused to move, for various reasons. I'll probably never know why, or if their reasons were valid or imagined.

but before we actually jump ship, it's nice to think back about the reasons I initially had for not moving, and what has changed. and I'm surprised at how much my perspective has changed after my first move. it all seems to make sense in a beautiful way.

cheers to moving!
at June 17, 2018 No comments:
Email ThisBlogThis!Share to TwitterShare to FacebookShare to Pinterest
Labels: moBlogged, my life, self realization, travel

ever wonder what it'd feel like to write a suicide note, and then call off the whole thing? and maybe find the note few years later?

this was in my drafts from 3 years ago:

my blog has always been a tricky place. when I started off, I never imagined it'd feature anywhere on Google. I wrote some rather questionable stuff. I loved my blog. it was the uncut, truthful face of me. a few friends read it, but i didn't really care. it was one place I didn't have to worry about what I said, who'd read it, or what they'd think of me. I told people I write for myself.

but then people started following my blog for what I wrote. my family started reading it. people at work started reading it. I had to be conscious of what I wrote, but that was fine. I've mellowed a bit as a person, and i don't usually feel the need to rant. my blog was largely personal and philosophical, and in keeping with my life philosophy of having nothing to hide, i didn't really find it a burden.

but then suddenly, things changed. I'm suddenly no longer just answerable to myself. and apparently more people read my blog than I imagined. end result: it's no longer about what I'm comfortable with posting. and if there's one thing I dislike, it's not living on my own terms. I'd rather die than be caged. and so, it seems, it's time to abandon this blog until I'm free again. I say this with a heavy heart, because I hate to admit that i'm no longer free. but that's what it is, and there's no mincing words.
so finally, hope I managed to make you guys smile, laugh, or at least go hmmmm some time during the last 9 years. if you see another post, it means I'm free again. until then, you can always contact me using the links on the side... but this is it, here. adios.


i'm glad i didn't go through with it :)
at June 11, 2018 No comments:
Email ThisBlogThis!Share to TwitterShare to FacebookShare to Pinterest
Labels: arbit, metablog, my life, relationships

the kitten on the plane

i was at home, sitting at the dining table with mom and the brother. we had a little kitten. a really tiny white furball, round eyed and small enough to literally fit in one hand. the kitten was playing around, but a little unsteadily.

we were making unremarkable talk, and munching on stuff. it seemed to us like the kitten wanted to sleep but was too excited to do so. we were trying to figure how to get it to sleep, but nothing seemed to work.

but then, I held out my palm, and the kitten crawled into it and curled up. it was tiny enough to fit! and before we knew it, the kitty was asleep.

the dream paused. I think I woke up, or something.

but then, next thing I knew, a big vehicle was parked outside our place. the vehicle felt like the body of a small plane, with a ramp to get in and all. we loaded our luggage, and got in with a couple of bags, including a tiny suitcase that would fit in the overhead bins. I had a left side window seat, mom was next to me, and my brother was in the window seat in front of us. the vehicle was quite empty, and it wound its way through the western suburbs. I opened the suitcase on my lap, and the kitten was there, quiet and waiting for my reassuring touch. I petted it, and shut the suitcase before the stewards or any other passengers noticed. when we reached andheri, the vehicle crossed over to the east.

somewhere around seepz, the vehicle stopped moving and the attendant announced on the PA system that we're getting ready for take off. but before we take off, there will be a round of snacks passed around for the benefits of all the pets on board. there was a choice of roasted chana, boiled peanuts, and a couple of other things. i asked for a packet of boiled peanuts.

but when i opened the suitcase, the kitten was gone.

my brother searched under all the seats (discreetly, as we didn't want anyone to know our pet has gone missing - wouldn't that be considered irresponsible?). i searched inside the suitcase to check if it was hiding among the stuff packed in it. the suitcase was packed with packets of maggi and other noodles. these were snacks for the kitten. but there was no kitten.

i asked mom, what's the date. i asked her if it's still may.

she said no, it's not may, it's june. i asked her how that could be possible, when i have no memory of the days between the one where the kitten slept in my palm, which clearly happened in may.

mom told me that i have a problem where i have episodes of short term memory loss. and, in fact, that's the reason why she and my brother were traveling with me - i wasn't allowed to travel alone.

and that's when i woke up.
at June 11, 2018 No comments:
Email ThisBlogThis!Share to TwitterShare to FacebookShare to Pinterest
Labels: arbit, family, moBlogged, sleep, stories

lunchtime conversations at work have frequently led to this topic: what do (or rather, should) i do when i find myself reacting negatively, ro simply not performing at my best?

there's an informal checklist that i follow, which i have probably blogged partially a while ago (but somehow can't find now, because i have too many blogposts and cant remember the tags/keywords to look for!). but luckily for me, i came across this article today about "self-sabotaging behaviour" that had a deceptively different title, but contained my exact thoughts! as good as opportunity as ever to rewrite my post. so, my checklist (merged with theirs, but shortened and adapted to my life):