there's a tag for it, but this is something more:

this is what I live for.

every weekday morning, I ride my bike to borivli station, park it about 50 metres from where my office bus waits, and walk to it. the bus leaves shortly after 7:26 (it used to be 7:26 on the dot, but it's now usually 7:29), and it takes me a minimum of 4 minutes to unpark, ride the 2.5km to borivli station, and park. also, I have an incentive to be as early as possible: my favourite seat.

anyway, over the last 6 months, efforts have been on to shorten the the time I take to get ready as well. I started off taking 45 minutes (wake at 6:30), which I then reliably shortened to half an hour. this year, I had shortened it to 15 minutes if I skip something (usually breakfast and tea, but sometimes other things that I shall not specify :D). today, I actually got ready in 18 minutes without skipping anything. I guess I'll have to prove it can be done reliably before I can set it as my daily schedule. but I'm digressing:

last Friday, I probably woke up on the wrong side of the bed. I don't remember if I skipped anything or woke at 6:45, but I had left home at 7:18, and was 2 minutes early for the bus. and I also had no enthusiasm to do the 50m dash the way I usually do it (which is a flat out sprint, btw). so I walked.

halfway to the bus, the driver of a school van parked on the road waved at me. I slowed down, and he asked:

"why do you run everyday, and why are you walking today?"

I told him I need to catch a bus, which leaves at the exact same time daily, and I'm 1 minute early today.

but there is a deeper question I haven't been able to figure the answer to, yet:

why do I *need* to run for the bus everyday?

sometimes, sadly, blogs are stillborn. but the ones who make it through, will probably flourish in some sense.

a newborn personal blog is quite rough at the edges. experimenting around with features, widgets, layouts, colour schemes that change by the week. in one word, unpredictable. they're full of pent-up energy, stories, ideas. and everything seems like a good idea. the overflow of ideas can make it directionless. and in all these senses, the blog is childish. but nobody really cares too much about the personality of a young blog, because the author is probably the only reader and definitely the biggest fan.

and then there's blog youth. when the blog finds its rhythm, is lively, fun. finds its direction. explores its spaces, occasionally goes beyond, subtly altering its direction in the process. the best part of a blog's life.

but at some point, the blog becomes a victim of its own maturity. the expected standard of posts becomes exceedingly higher, and hence the quantity of posts becomes increasingly lower. barely any self-proclaimed junk can make it past the publish button. it is so set in its direction, that quirks become rare. posts get re-read, proofread, edited for style. the layout and theme is so set, it can't be changed easily. everything just works. and hence, nothing can really change.

that's where i think this blog is at, now. i don't want to reinvent it, because i'm happy with the way it is, but i realize something's missing. my posts these days are nothing i'll be embarrassed about 5 years later (i hope!). i don't think i can go back to posting jokes, crying about missing an ex, sharing my favourite songs' lyrics. because feel my blog has grown past that. my last decision to make it more lively with photos, fell flat when i didn't post a single photo after the announcement.

and now, i'm wondering where it's all headed to. more middle age? senility? death? or some misplaced attempts at acting youthful again?

maybe i should go back to stop caring about who reads what, and write for myself. make it personal again. throw away this act of political and grammatical correctness. make it more like the real life, uncut, uncensored "me".

i wonder.
at March 09, 2013 No comments:
Email ThisBlogThis!Share to TwitterShare to FacebookShare to Pinterest
Labels: metablog, observations, philosophy, self realization, social media, wisdom

it's been 9 months since i joined the new office. my first few months were kinda lonely there, and the few attempts I tried at making "frandsheep" failed quite tragically.

still, my nervous attempts at being sociable and the general niceness of my office-folk ensured it wasn't a permanent situation, and i'm now quite well-settled. not like the previous place, where well over a 100 people knew me personally (yeah, 5 years is a *long* time!), but it feels like i have some real friends here, and that's what matters.

anyway, what's friends like without a few shenanigans? since we mostly hang out over (and after) lunch, the stories are mostly food related.

like this one day, when i refused to share my gulab jamun dessert. and coincidentally the veggie was something with baby potatoes.

after one slightly sweet spoonful of veggies, i realized what my friends had done: swapped the gulab jamun with a baby potato. lucky for me, i swapped them back... no damage done.

But then, the day came for revenge.

The friend who did the swap was poised with his dessert in his hand. don't remember what it was, but it was something dry and sweet.

and he was engaged in conversation, looking at whoever was sitting to one side... while i, from the other side, liberally sprinkled it with salt from the shaker.

The expression on his face after that first bite was priceless.

ps: typed in a bandra-fast from borivli, while sipping on my party pack of monk and coke. funfun!

pps: title dedicated to nickolai, who is the only person i know who uses the word "shenanigans" :)

From: "Andrew Smith" <andrew_smith009smith@aol.com>
Date: Mar 4, 2013 2:10 AM
Subject: work offer)
To: <kris...@gmail.com>
Hello,
I'm Dr Andrew Smith, 53yrs of age, I'm a Dentist, I have been pretty successful in a handful of ventures which have involved. I'm presently working with UNICEF and other private organizations, also various welfare and community service programs.
As my assistant, your activities will be:
* Running  errands and supervision
* Taking care of my Financial activities
* Appointment schedule
* Memo
Wages is $ 500 per week.
We will start with things as soon as possible. I do have a pile up of work and a number of unattended chores which you can immediately assist me with and i hope we can meet up with the workload eventually. Permit me to use the coming week to test your efficiency and diligence towards all this, also to work out your time schedule and fit it to mine.I really need to find the perfect person for this job, I have confident in you that you can take-up the challenge and on the long run we should have a relatively sound working relationship between each other.
This is only an introductory e-mail, as time goes on we should be able to arrange a proper meeting to get things started officially when i get back from my trip because am currently in Belgium for health Summit.
So i will be here for couples of weeks, till i get back this position will be a part-time and home-based job because my new office in your local area will not be set up till i get back to the state.
I have been checking my files and I would want you to do for me is to help my clients get their monthly medication from the Pharmaceutical Company.
The funds will be in form of certified Cashier's Check, it will be sent over to you from one of my clients and I will e-mail the guidelines to you once you receive it.
FILL YOUR DETAILS BELOW FOR APPLICATION:
First Name:
Last Name:
Full Street Address (not PO BOX):
Cityy:
State:
Zip-Code:
Cel Numbr:
Home Numbr:
E--mail Address:
Ag:
at March 04, 2013 No comments:
Email ThisBlogThis!Share to TwitterShare to FacebookShare to Pinterest
Labels: 3am, arbit, hoax, humour, moBlogged

i'm usually quite fearless, even when alone. i remember poking fun at my friend reshma, who apparently gets scared to enter one bedroom of her own house when the lights are out.

today was different though.

i was alone at home, sitting in the dark at my pc. a few minutes earlier, i had just made tea hot for myself (and also added a bit of vanilla essence in a random kitchen experiment, but that's another story), and placed the empty milk vessel and my mug in the sink before going back to my pc.

after a few minutes, i heard the sound of water coming from the kitchen. went there, and found the tap around half open, water flowing out of it. i knew it couldn't have been me, as i'm quite particular about these things. still, i closed it and went back.

went to the kitchen, and the tap was wide open.

closed the tap again, this time being a little extra careful to make sure it's completely closed, and went back to my pc.

and then a few seconds later... i heard it again.

closed the tap, waited in the kitchen for a few seconds, and it held.

went back to my pc. sat there. and heard the sound of water again!

this time, i tweeted about it. and frankly, i was finally slightly spooked.

so i went to the kitchen, closed the tap as far as it would go, and not knowing what to do next, went back and tweeted some more.

this time, i was relieved. no sound of water. i was going to tweet that all's well at last (a couple of people responded to my tweet saying that it's probably nothing, etc), but decided to check again first.

and guess what. the tap was open, water flowing, but i somehow couldn't hear it from the hall. this time, a chill literally ran up my spine.

scared as i was, i decided to open the tap and keep staring at it.

turns out, the tap was rotating backwards and opening by itself. it rotated quite slowly and had to turn quite a bit before water started dripping, which kinda explains all the earlier occurrences.

relieved, i fished out my camera, and tried taking a few 30-second exposures of the tap... for science.

nothing on camera, other than motion blur on the knob of the tap, while everything else is completely sharp and still. 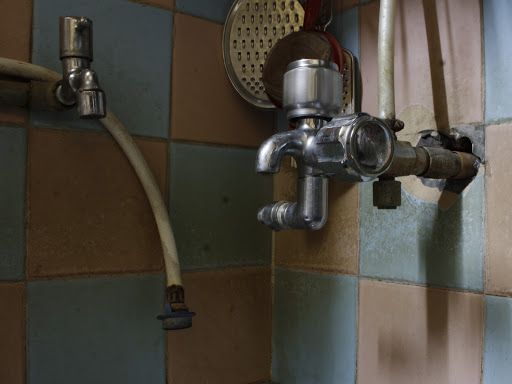 guess this is the first time i've ever been creeped out in my own house. just had to get it out there.

ps: i also recorded a video on my phone (probably the fist video recorded on this phone, possibly due to its embarrassingly bad quality :D) and uploaded it, making it my first ever youtube upload! ah, well. small joys.