someone added this disclaimer to their reply in a debate happening over email at work:

"sorry if i misread and that you're saying the same thing as I did, in which case i hope it clarifies to others reading it the same way as i did."

at June 26, 2011 No comments:
Email ThisBlogThis!Share to TwitterShare to FacebookShare to Pinterest
Labels: humour, moBlogged, office

the window's a wound, the road is a knife.

funny how when you're in control of your own wheels, you feel nothing but the road. and when someone else is driving, the road pales in significance to the driver.

and yet, the driver is oblivious to you.

ps: posted from a bus to goa. and I can tell the difference between overtaking and a meandering road without even thinking. if I close my eyes and lie back, I might just be able to sense the speedo and tacho.

at June 22, 2011 No comments:
Email ThisBlogThis!Share to TwitterShare to FacebookShare to Pinterest
Labels: arbit, living the dream, moBlogged, travel, vacation 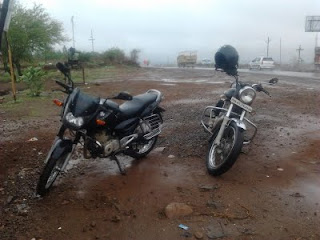 last Friday evening, my friend martin called me asking the directions to nashik.

6 hours later, I was on my way there.

in the 3 years that I've been riding, I guess I've always had my fear of riding in the rain. I used to also have a slight fear of night riding, but that was right at the very start of my riding life.

at 5:30 am that Saturday morning, the sun was far from making its appearance. nor were the rains (it had been pouring for atleast 8 straight hours around home) any nearer from going anywhere.

so I got on the road, armed with my now-aging helmet (that let's rain in from the gap between it and the visor), and my windcheater that was never intended to be waterproof.

5 minutes later, I realized how freaky a task I had set for myself. and so I said to myself, while squinting through starbursts of oncoming high-beams through a rain-streaked visor: night-riding is fun, rain-riding is okay...but night-riding in the rain? never again!

little did I know.

the ride to nashik was fun (martin was late, so I spent 45 minutes standing at the highwayside, soaking my already-soaked bones - and he arrived right after the sun, but that's another story). chai and a breakfast of super-fresh jalebis (so fresh that they were crunchy!) primed us, and the next bite we had was lunch in nashik.

the plan was to ride to bhandardhara on our way from nashik, but post-lunch laziness got the better of us and we decided to drop that leg of the itinerary.

so finally, we set off homeward from nashik at 5:30 pm.

a 4-5 hour ride with an hour left for twilight.

and so, the inevitable happened: it started raining right after the sun set.

in fact it was hard to tell if the sun had set, riding as we were, through clouds inside kasara ghat with barely 10 metres visibility (and by visibility I mean being able to determine the presence of a vehicle ahead by its tail-lights).

right as we set off from nashik, I felt the urge to pee, but kept myself going, chasing the sunset.

by the time the sun set, I was so firmly planted on my trusty bike's seat, that I didn't even feel the need to push myself to keep going.

and as dusk faded into darkness, I was gradually brought face-to-face with my recently declared enemy.

I wouldn't say that I've conquered it completely, but I've realized that I'm at the point where night-riding in heavy rain is fun.

it's an amazing feeling, when your senses are so tuned that in the haze of rain-occluded headlights and oncoming high-beams, you can still see a tiny frog jumping across the road.

that was the beauty of the ride. and it was an awesome feeling.

oh and some interesting things I learned on the ride:

the best way to use the helmet visor is half-down: it protects your eyes from rain, and still gives you a dipper-style field of view.

watch your rearview: vehicles overtaking are my biggest fear. I think I focused more on my rearview than the road! especially because you've slowed down, and 4 wheelers on the road somehow get a kick out of speeding even more. scary.

beware of the blind spot: don't know about other bikes, but my bike's rearview mirrors have a blind spot on either side...and the blind spot is dangerously nearby. what I do is, wait atleast 10 seconds after signaling a lane change, and slow down a bit before switching lanes.

follow a big vehicle: pick a decently fast-moving bus that can be recognized from far away, and stay near it. don't tail it (I've had way too many near-misses to even consider it!), but stay in the same lane. you don't have to worry much about fast vehicles cutting you off when you're behind a big bus :)

anyway, it was the ride of a lifetime. looking forward to doing many, many, more! 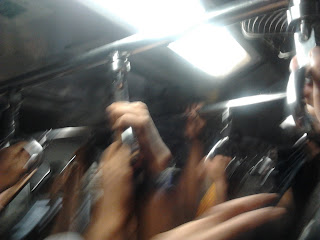 was hoping to blog during my 35 minute train journey.

I managed, I guess.

ps: guess the guys in the train were suspicious about what I was trying to click. got some suspicious stares from a few people. and one guy is reading this post as I type it ;)

i live such a strange life, that on days when my lunch only contains veggies, i still microwave it in the microwave reserved for non-vegetarian meals, in the hope of picking up some non-veggie aroma/flavour.

it's never worked so far, but i still do it, 4 years later.
at June 09, 2011 No comments:
Email ThisBlogThis!Share to TwitterShare to FacebookShare to Pinterest
Labels: arbit, food, my life, office

if you're fighting to live, it's okay to die.
- @krist0ph3r, one troubled afternoon, on twitter

to elaborate, the price we're ready to pay should be commensurate with the goal of the fight. and that's how it should be. anything else would be unrealistic, or worse, foolish.
at June 08, 2011 No comments:
Email ThisBlogThis!Share to TwitterShare to FacebookShare to Pinterest
Labels: quotes, self realization, wisdom

much as i hate labels, i'm forced to conclude that i'm a geek.

and one thing that geeks hate, are people who refuse to seek answers for themselves.

there are days when i'm asked a question, and my answer is "why don't you google it?", and refuse to tell the answer even though i know it.

well, first (but not most) of all, efficiency. you're the one with the question, you're the one who needs to recieve the answer, and you have the means to get at it. i don't see what value i'd add by finding the answer and passing it on to you.

but most of all, it's because i'd rather teach you to fish than give you a cooked one for lunch.

it may seem funny (and almost contradictory to the efficiency point above) that i usually actually google the question myself before asking someone to google it. after all, i don't want to mislead or make you run around in circles. but i do want you to run for yourself.

ps: post inspired by a conversation with ankita and harshad, and eric raymond's post on how to ask questions, that i read long ago and so completely identified with :)
at June 06, 2011 1 comment:
Email ThisBlogThis!Share to TwitterShare to FacebookShare to Pinterest
Labels: arbit, friends, geek, wisdom

the much-awaited first rains were 2 days ago, on thursday. but surprisingly, this time there wasn't the much awaited petrichor, or scent of the first rain on dust. probably because of a drizzle 2 days before, which left my bike coated with a layer of muck within the 2 brief minutes that it lasted.

anyway. back to the first proper rain. as usual, there were reports of rain from other parts of bombay, culminating with mom looking out at the terrace and declaring that it has finally arrived.

i didn't waste a minute.

last year, the first rain was such a brief spell, that by the time i called nickolai and took my bike out, it had pretty much stopped.

this time, thankfully, it was different. nickolai was studying for her exam the next day, and the rain was mroe a torrent than a drizzle. 10 seconds on the road on my bike, and i realized i could barely open my eyes against the gusty downpour. fun times.

so yeah, i got drenched, passed teenagers dancing and frolicking in the rain, scouted the colony and areas around for puddles to splash through (this is probably the only time you can splash bystanders without affecting your karma, after all!), and finally found my share of rainy bliss.

unfortunately, the neighbourhood vada pav guy shut shop with the rains (he probably hadn't carried his huge umbrella), but there was toasted bun-maska and chai waiting for me at home to make up for it.

anyway, what was the most fun part of the ride (after the splashing through puddles bit, of course)?

attempting to engine-brake hard on a downhill sharp left turn, and doing a nice 90 degree spin. but no feet on the ground. yesh, my bike's tyres can now be proclaimed bald.