an old dream, been in my whatsapp messages for a little over a year... it would have probably been never posted if i didn't happen to be searching for something else and chance upon it! talk about serendipity :D
we were somewhere in Kashmir. somewhere near pakistan occupied Kashmir. we had to walk a short distance to a restaurant. only problem was, there was some sort of armed conflict happening on the way. the army guys assured us we would be safe, as long as we stayed under cover. we stood for a few minutes on one side of a parked car, while on the other side, soldiers opened fire at (presumably) terrorists we couldn't see. the firing stopped.
suddenly, we realized two men, dressed identically (pista coloured button down shirt and black trousers) had walked towards the car from the side the soldiers and firing was. when they had almost reached the car, two soldiers appeared, chasing them from behind, shouting something. they caught up with these two guys a few feet before they reached the car, spun them around, and shot both, point blank in the face.
as the rest of the soldiers took the bodies away, one of them approached us and said the situation is safe now, and we could come out from behind the car and walk freely.
while my friend stayed put, i walked in the direction the firing, a few minutes ago, was towards. it was a narrow lane between two buildings, partly blocked by a van, parked sideways, across the lane. when i walked around the van, i saw that it was just the shell of a van, and the interior was hollowed out and filled with what looked like explosives and flame throwers. I looked at the stuff, and was about to touch something when a soldier who was standing next to me stopped me.
disappointed, i turned back to where my friend was waiting, and we walked forward, down a broad road, towards where the restaurant was. we passed someone who recognized my friend - apparently they were colleagues or something. barely a minute away, the street grew crowded, and we realized we were in the middle of a demonstration of some sort. people were out on the streets, shouting slogans, and the road had been blocked by a red double decker bus that had collided with a black-and-yellow taxi. luckily for us, the demonstration was happening on the street, while the sidewalk was empty, letting us pass easily.
someone walked up to me and told me that since my friend is pregnant, i should hold her, so that people know we're together and don't harm her. I found that weird, but agreed.
it was very awkward, holding my friend and walking, and we made very slow progress now. eventually, we reached the entrance of the restaurant, which had green carpeting. it was more like a passage on the side of a garden, with a glass wall on the side facing the garden, and a concrete wall on the other.
as we entered the lobby, the carpeting was now red, and the decor was very plush - it had that old worldly vibe. the waiters were wearing red jackets and turbans, and their outfits were very elaborate.
I told my friend that I can't hold her any more as walking like this was very awkward and my arms were aching badly. as i let go and looked at my hands, I noticed they looked completely different from what my hands normally looked like - the fingers were oddly twisted at very strange angles, and my hands were quivering so badly I couldn't even grasp one with the other. my friend, alarmed, asked me if I'm fine. I told her my hands would recover soon, and there's nothing to worry about.
we climbed a couple of flights of the very broad stairway, and we were at the restaurant. the restaurant had one one big oval table (maybe enough to seat 15 - 20 people) and a bar at the side. the table was mostly occupied, it was a mix of people our age and others who were much older, and formally dressed.
my friend said she'd like a large old monk and coke, and i told her I'll get it from the bar.
I went to the bar and ordered two large old monks and coke. the bar was very different from any bar I had ever seen before - it was a low ornate table with a green velvet tabletop. the bartenders (there were two of them, dressed in the same livery as the rest of the staff) poured our drinks. meanwhile, I noticed there were books lying on the bar. I looked at them and realized these were books I wanted to read. the bartender told me I could keep them for myself. the books were quite large and heavy, and i realized i couldn't carry them with the two drinks. also, at that moment, I realized that my friend shouldn't be drinking, as she was pregnant. I reasoned that it was her decision to make, but i will remind her once I took our drinks back to the table.
meanwhile, I paid, and got some change back. strangely, the change was all in coins. most of the coins were 10 rupee coins, but there were a few 5 rupee coins as well. and when counting the change, I actually noticed one of them was a 25 rupee coin, which I picked up with surprise. I had trouble stuffing all the coins into the change pocket of my wallet, so i put a few into my shirt pocket. the last coin I picked up was a 5 paise coin, which I put into my wallet "for good luck".
and that's when i woke up.
and btw, I actually have a 5 paise coin in my wallet. I've been carrying it around for years, but i don't remember how I got it. 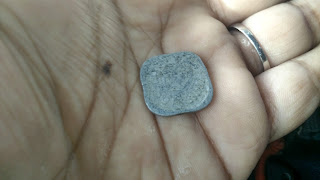 one day, i was philosophizing to myself about the nature of failure. later, when explaining it to a friend, i managed to put is succinctly enough to merit putting it down for posterity.

and so, here are my "levels of failure", in ascending order of degree:

these thoughts came to me when i was thinking about why it was so difficult to manage 5 days of gym in a week.

it's been roughly 7 weeks of gym now (yes, i'm not counting the one month break at all), and i've not managed 5 even once. i only managed 4 for the first time last week. i usually just manage 3. and i was trying to figure why.

so, based on the above framework, this was my explanation:
at June 20, 2016 No comments:
Email ThisBlogThis!Share to TwitterShare to FacebookShare to Pinterest
Labels: my life, observations, philosophy, self realization, wisdom

i have an obsession with old music. not just any old music, but specifically stuff i grew up listening to, and now can't, either because my turntable isn't working, i don't have an audio cassette player, the cassettes weren't labeled properly (yeah, pirated cassettes, lol), or some other randomness. and then of course, there's stuff i can identify but can't find, either because it's not online, or because there's new and popular stuff with the same name, and i get tired after clicking through 10 pages of youtube results (especially since there's also a chance i may have been mistaken to begin with).

i still keep searching randomly though, and as google gets better, more media gets uploaded, and maybe i get lucky enough through dogged determination, i sometimes meet with success.

it's hard to describe the feeling when i finally find what i've been looking for.

it's hard to explain why i'm such a memory junkie.

i think i've mentioned before, that my present somehow revolves in a loop of past music.

i don't know why i don't really care for new music any more.

someone told me recently, that you only get old when you stop looking for new things.