it was Saturday evening, 8pm. I had accomplished most of my weekend agenda, and had only one major thing left to deal with: the itch to travel.

my thoughts at the start of the weekend were, I'd wrap up my agenda by sunset, and set off to malshej to camp out by the lake, alone. not that I particularly needed the space at the time, but i just felt like randomly doing something I hadn't done before. 8pm was a little too late for such shenanigans though, so i had to make do with vegetating at my pc with a beer that's been waiting for me in the fridge for a month too many, munching on slices of grilled pork that I prepared that afternoon.
Sunday would be different though. I had the whole day free.

and given the weather, i couldn't think of anything better to do than ride.

and so, I called the first person I could think of: santosh. he was reluctant until I mentioned we'd do some off-road trail biking. and then he enthusiastically agreed.

we had quorum, the ride was on!

I still did the perfunctory whatsapp announcement, called a few friends who I thought would be enthu, but nobody was free all day on Sunday. and the ride i was planning was gonna be a longish one.

the rendezvous place and time were fixed, and i was ready to go to bed at midnight, when i remembered that I hadn't rigged my cam to use the waterproof case yet.

further inspection revealed both of my camera's two battery packs weren't charged, and to top it all, I hadn't transferred my last ride's videos either!

and so, I started working on preparing the cam.

3 hours later, the mount was ready, both battery packs were charged, and we were done and dusted. I had 3 and a half hours to sleep. 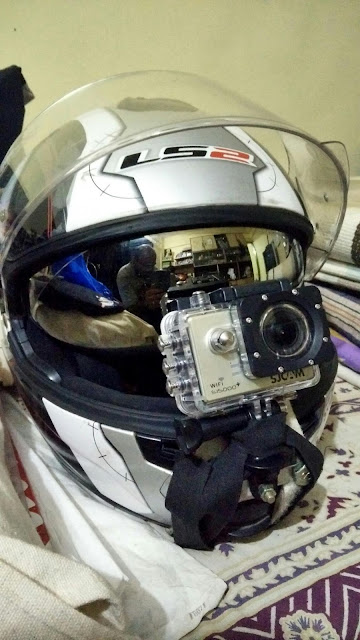 three and a half hours later, i was up and about, and ready to hit the road. it had been pouring all night, and it looked like it was gonna be a fun rain ride as expected.

rode till thane, and suddenly noticed the roads were drying out. kalyan, our rendezvous point, was completely dry. still, it was overcase, and one could only hope the clouds eventually turn into rain.

By the time we reached murbad, we were pretty hungry, but the stalls opposite the bus stand were pure veg... an i can't do without my morning fix of eggs! there was another group of riders, they were probably melting inside their raincoats, visibly disappointed at the prospect of not encountering rain. we rode on further, and finally stopped at a dhaba just before the ghats started. I had missal pav and bhurji, while santosh made do with what he could get (just potato bhajiya, sadly!) and chai.

breakfast done, it was time to rig the camera onto the mount. and it was positively sunny by then, so i even put on my sunglasses!

video on, we started climbing the ghats, and at one point, a biker pulled up and honked a couple of times - before i recognized him! we stopped, he was with a couple of friends (another of whom i knew as well). introductions were done, we exchanged notes on our plans for the day, and rode on.

malshej was good as always, other than the lack of rain. we reached the top minutes after the camera froze (it does that after every half an hour of video... strange!). we stopped at a shop at the next village, to parcel some lunch and drinking water.

my friends saw us there, stopped, and told us that they've decided that my plan (off-roading to naneghat) sounded more interesting than theirs (riding back to mumbai via junnar/talegaon). and so, we were now 5 riders instead of two.

they picked up lunch too, i swapped batteries in the camera, and we were off!

we took the turn off the highway a few km ahead, onto what used to be a broken tar road which should have given way to a mud road to naneghat - except that it had been recently paved, and was now pretty good, save for the occasional pothole. so much for off-roading.

we reached naneghat. had a good lunch (chicken curry with bhurji, lol), walked around, clicked photos, relaxed a bit, and generally took a break. 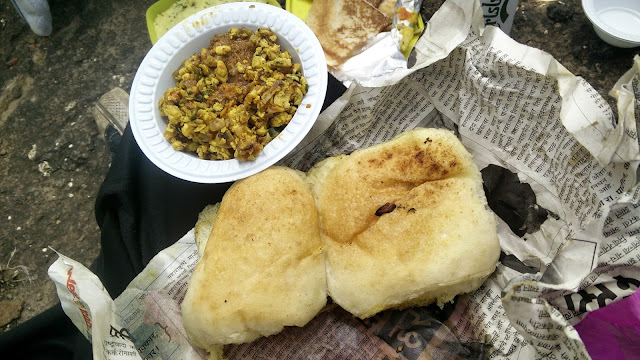 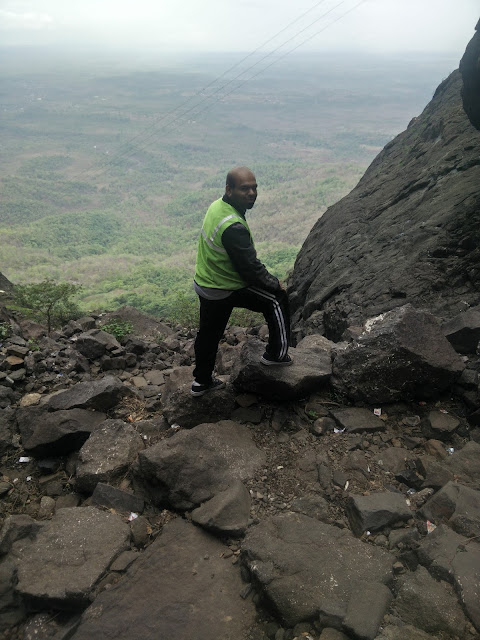 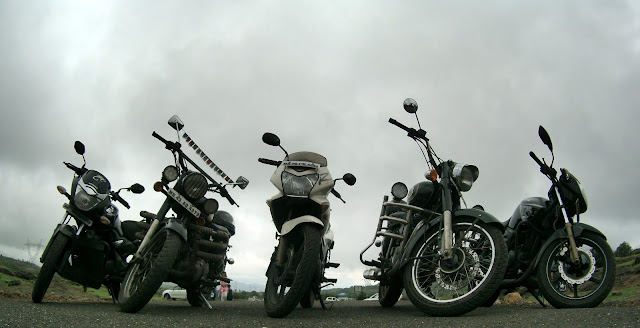 And then, we started back. Santosh had a flat tyre, so we figured Junnar was the best bet to get it fixed. And so, we ended up doing the circuit after all.

The roads to Junnar were excellent (much better than the roads from Malshej to Naneghat), but after we passed Junnar, there was plenty of traffic. Also, we finally got rain! It started off with about two hours of drizzle, the sort that leaves everything slicked with muck, and that wasn't helped much by the irritating traffic: unruly bikers, aggressive car drivers, and truck drivers that seemed out to mop you off the road at the slightest opportunity. We reached Chakan at about 6, and it started pouring. By the time we reached Talegaon, we were soaked, the traffic subsided, and we were back to enjoying the ride. Talegaon to Lonavla was an awesome ride in a downpour that made up for the rest of the day's dry spell. Despite it being dark by now, we enjoyed this stretch to the fullest.

By the time we reached Lonavla we were in dire need of comfort food. Egg Maggi and chai it was. we stood under a shed, juggling our plates and cups, as the two chairs were only enough to hold our helmets and bags.

By the time we were back on the highway, the rain was back to a drizzle. We took the Panvel - JNPT - Uran road - Palm beach route, and reached Vashi to bid farewell as everyone parted ways. I had company until andheri, but there was so much traffic on the way that it was pointless trying to ride together. We parted ways after SCLR, and I rode home at my own leisurely pace.

And so, i was finally back home: drenched, mucky, tired, but refreshed after 420 kms of almost every sort of road and weather conditions we could hope for. it was an amazing day of riding, and bumping into friends and the last minute change of plans made it even more fun than we were expecting when we left from home! A sunday truly well spent.
at July 05, 2016
Email ThisBlogThis!Share to TwitterShare to FacebookShare to Pinterest
Labels: bike, food, friends, living the dream, moBlogged, my life, places, rain, travel
Location: Naneghat, Ghatghar, Maharashtra 421401