after waking up from this dream, i decided to light the bedside scented candle. and then dozed off.

when i woke up, the candle had been burning for a while, much longer than we usually leave it burning. i looked in and noticed all the wax in the holder had melted and i could see through the translucent green wax all the way to the bottom. and then a curious thing happened. the wax began to boil. first, in tiny bubbles, and then abruptly, it became a rising opaque mass of foam, with bubbles so tiny that it almost looked solid! the foam rose to the top of the candle holder, and i was scared it would spill over, so i started blowing gently at the centre of the candle, near the wick.

blowing at the boiling wax started to break the bubbles and halt its rise, and strangely, also kept the candle going, because the bubbles had crossed the level of the wick.

i decided to take my chances and stop blowing, and see what happens.

the foam of wax bubbles extinguished the flame, and the foam died down almost immediately.

i tried lighting the candle again, to check if i could reproduce the phenomenon. sure enough, i could.

i then tried waking shruti up, to show her the candle's strange behaviour.

it was early in the morning, barely past sunrise, and shruti understandably took her time to wake up, and definitely wasn't interested in watching the candle.

meanwhile, the wax cooled down, so when i tried lighting the candle again, it didn't boil over. irritated, shruti went back to sleep, while i continued to watch the candle burn.

sure enough, after a few minutes, the wax began to boil again.

i extinguished the candle before it fully boiled to the top.

i woke shruti up again, and told her to check out the candle. she told me the candle was off.

i turned to light it again, and then realized the candle was solid, and hadn't melted or boiled at all.

in fact, it was all a dream!

ps: i then did light the candle, just for this photo :D 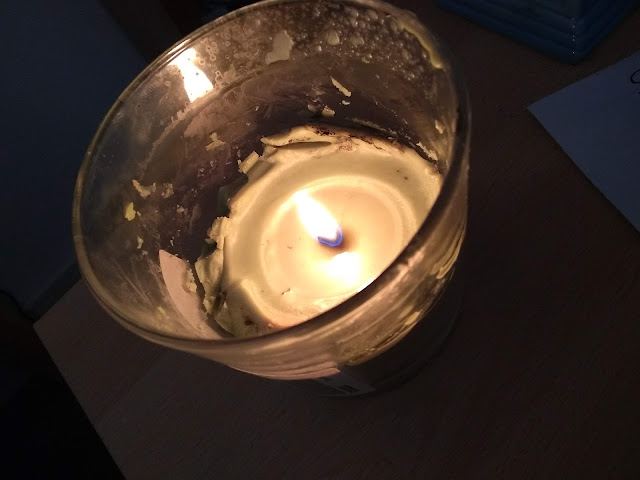