I still haven't gotten my head fully around time dilation at relativistic speeds (yeah, even though I watched interstellar for the second time last weekend), but i have noticed one thing: time seems to slow down when i'm physically moving. and it somehow seems to go faster than it should, when i'm either doing nothing, or doing something mental. (no, not mental as in crazy, but mental as in with my mind)

take yesterday evening, for example. i was working till 5:28 PM. that's when i started packing my bag to leave from office, and simultaneously realized i need to pee and am incredibly hungry. and my phone rang too.

packing done, I walked to the washroom, did my business, and paced my way to the elevator lobby. smack in the middle of rush hour, with everyone waiting to catch an elevator down... with me the only guy waiting to catch one going up. 5 minutes of wait later, i hung up and was headed to the cafeteria, wondering if I should step out and give away my precious spot, or wimp out and go back down.

a quick glance at my watch told me I have 6 minutes to get back into the elevator, or I'd miss the bus.

paced past the packaged stuff counter, the guy at the counter wasn't there (i was half contemplating buying a packet of biscuits, if he was). so u made up my mind. parceled chicken lollipops it is.

entered the cafeteria, and there was no rush anywhere. i eyed the regular snacks. nothing I could parcel (or that I'd particularly fancy eating). I confirmed that lollipops were on today's special menu, and brought the token for it. gave the token, while I fished out the bag u used to hold my breakfast on my way to work in the morning.

and that's when i realized i had no way to shut the plastic bag (or the paper bag around it, for that matter). i balanced the bags as nicely as I could, vertically, inside my office bag. it was a very risky thing to do, as I had my headphones, tab, ipod and whatnot in there, with nothing to save them from the chilly garlic sauce, should it tip over. but there was no time to think now. under a minute left.

made it back to the elevator lobby. staring at my watch, watching the seconds tick.

checked my phone, because my watch is a minute and a half fast, and i was cutting it close.

when the elevator arrived, it was 5:42 PM, the absolute latest I can catch the elevator and make it for the bus. luckily, it had room for me. I nudged others aside to get in (i'm sure they saw my backpack and figured I was racing for the bus)

the elevator filled up, and started descending through the building. people getting off and on at every other floor. at one point, the elevator doors refused to close because it was overloaded, and i had to hold my composure while the last two ladies who entered last, silently debated among themselves who should get off the elevator. i opened my bag to check that everything was intact.

5:44 PM; i'm on the ground floor, and need to dash down three floors of stairs to the basement, across the parking lot, and find my bus.

except that i can't run, because it'd topple the paper bag inside my backpack.

i speed walked, found my bus. seated myself next to my friend (he leaves his desk at 5:25 PM daily, to catch a window seat with a fan).

he told me that I missed chicken lollipops in the cafeteria today, they would have been nice.

I grinned at him, as I opened the bag, and told him that I didn't. 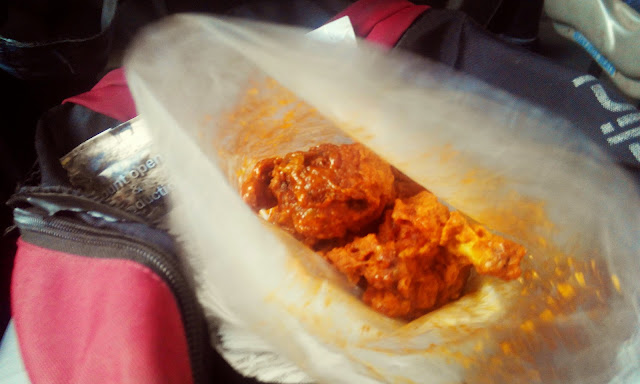