Apparently it's possible to be happy no matter what. Be it listening to (tripping on, actually) the most awesome music being played live at point blank range on the beach, or lying alone in a hospital bed with a dislocated shoulder, alternating between crying with pain and moving my good arm to the tune of music still playing in my head, and everything in between and beyond. I don't know how to explain it. Is it because i'm on vacation? Is it because i'm surrounded by awesome people? Is it because i feel loved and trusted? I don't think so.

i think it just is.

at December 31, 2009 3 comments:
Email ThisBlogThis!Share to TwitterShare to FacebookShare to Pinterest
Labels: moBlogged, self realization

My first ever underwater pic of myself! 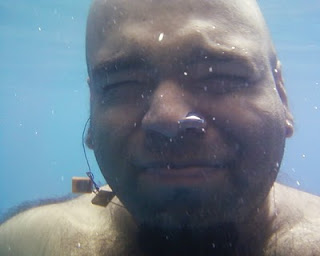 (not) another of those dreams

gentle plea: please don't tell my ex- about this one :D

so i had a dream two nights ago. nothing out of the ordinary about that.

still, my chances of having a relationship with a normal girl are as close to zero as 1/x as x -> infinity (more on that in a later post), so this couldn't possibly dent them by much anyway...and i promised myself that if i remember the dream at the end of the day, i'd blog it. and i do, even two days later. so here goes:

first, the setting: we're in a small village surrounded by a high rock wall, somewhere in the mountains. more like a high-is plateau surrounded by mountains on 3 sides and a valley on one. she lives near the middle of the village, but slightly to one side. i live right near the wall on the other side. it's early evening (4ish?) on a cloudy day.

also, my ex- in this dream (let's call her "D"), in a stark contradiction to her real-life namesake, is short, darkish, and rather thin. but her name was the same, as was her voice, and the way her hands felt. and i remember that she was my ex- in the dream too.

okay, so now the dream.

D and i were near the middle of the village (in front of the village square, on the other side from the school). generally fooling around with each other (pulling cheeks, pushing each other...friendly messing around). making small talk (surprisingly, i don't remember the conversation at all).

she announced that she had to take a walk outside the village. i had to go home. we walked together till our ways parted, near the entrance. said the usual goodbyes.

then as she walked off, i called her back.

i pulled her up to me and kissed her.

she tried to get away.

just before letting go, i told her i was going away forever.

she held onto me and refused to let go.

i asked her if she'd remember me.

she told me she'll remember me, and every single moment we shared.

suddenly, instantly, the sky grew completely overcast. black as night. one of us tripped on something and we both fell, holding onto each other.

i tried again to let go and stand up, but she didn't let me.

people were stumbling by in the darkness, and i was very embarrassed, thinking they'd notice us both lying in the darkness on the path holding on to each other...but she refused to let go.

suddenly the clouds parted, letting just a thin bright crack of sunlight through. and as if through two prisms, we saw two bright rainbows. the rainbows parted and moved away in opposite directions. we watched on, holding onto each other, dumbstruck by what was happening in the sky.

we then realized the rainbows were being formed by light passing through some sort of satellite or spacecraft or something.

the things in the sky started moving irregularly away from each other.

suddenly one of them exploded in the sky with a flash of light.

a few seconds later the other one exploded, just as the clouds parted quickly to reveal an almost clear evening sky.

i then started telling D about why it was pointless buying bottled water when tap water is as good.

a guy who had fallen down nearby in the darkness, and was also staring at the sky joined in the discussion and told us that he agreed with what i was telling her too.

(and then i woke up)
at December 22, 2009 4 comments:
Email ThisBlogThis!Share to TwitterShare to FacebookShare to Pinterest
Labels: arbit, my life, relationships, sleep

It's an awesome feeling when, faced with something you can't understand, despite wanting to give up on it, you find yourself thrown into the midst of it, start tackling it on a "need to know" basis, and suddenly realise you understand it completely!

ps: also probably the longest sentence on my blog too :D
at December 18, 2009 2 comments:
Email ThisBlogThis!Share to TwitterShare to FacebookShare to Pinterest
Labels: moBlogged, my life, observations, quotes

Yesterday evening, while about to leave from work, i had to call a friend to let him know i was leaving soon. I was already on another call on my desk phone, so i decided i'll dial his number and put my desk phone on hold when he answers.

he answered. Said something. At the same time my other friend said something else. I was about to ask her to hold the line when i realised i was gonna say the same thing to both of them.

and that's what i did.

k: i'm about to leave

t: ya ya i'm hurrying!
y: gimme a missed call when you're in the parking lot.

ladies and gentlemen, a new level of #awesomeness has been breached.

how to wake up thinking it's monday morning

i woke up few minutes ago from the strangest dream:

it was set near my home, on a weekday afternoon. i was (for some inexplicable reason) walking home in my office wear, but not walking on the streets. instead i was jumping building walls to get home (which is quite possible in IC, twisted and roundabout as the roads are). and my 50+ year old uncle, (who lives and works in vasai btw) happens to be following me to my place, jumping walls etc. he catches up with me. we start jumping walls together. jump the last wall towards home. my building is now across the road.

and then we spot a police van.

it was about 30 metres up the road, at the crossroads nearest my place. and it was loaded with police who were getting out, but the ones who got out were just standing around the van and looking at it noncommittally.

my uncle grabbed my hand and said "we gotta get away from here".

and then we walk, hand in hand, *TOWARDS* the van (which is further away than my home now is, btw), but keeping to the opposite side of the narrow road. i was pretty embarassed to be walking around holding a man's hand, but i said to myself, "what the hell, he's my dad's brother - almost as close as my dad", and that is apparently convincing enough.

we start making small talk, discussing work etc, while we circle around the next block. which, btw, will get us exactly to where we started from, opposite the road from my home.

and then suddenly, a good friend of mine drives by and stops a couple of metres away. which is strange, because she doesn't know how to drive, and doesn't own a car either.

first, a little about the friend: she's a girl who wants to be a guy, and is currently saving up and preparing for the "operation".

so now this friend waves at me and then calls me towards the car, and then says "hey, hope you aren't offended by my question, but are you gay?"

i explain that he's my uncle and we're doing this so that cops don't come after us. i then call him over to the car and introduce them both.

strangely, my uncle asks us how we know each other, and she says it's through my friend reena who also lives in vasai, and that he might know her too. the truth is that i've known her for 10 years now, and known reena for a little over half a year. and none of them know each other!

so apparently my uncle does not know reena, and we're back to walking around the block, hand in hand (even though the cops are on the other side of the block and can't see us), and i even start swinging my arms like a kid while we walk.

and then the alarm goes off.

the first thing that went through my head: "fuck. it's monday morning."

and it's wednesday morning.

ps: i snoozed the alarm, and mentally replayed the dream so that i don't forget it. i fell asleep halfway and probably re-dreamed some parts too. the is the version that remained in my brain some 15 minutes after waking.

pps: the dream is here thanks to three tweeple who responded "yes" within 30 seconds of me tweeting "should i blog my dream" :D
at December 02, 2009 7 comments:
Email ThisBlogThis!Share to TwitterShare to FacebookShare to Pinterest
Labels: arbit, humour, my life, sleep
Newer Posts Older Posts Home
Subscribe to: Posts (Atom)

So, in this time of social isolation and forced/voluntary quarantine and whatnot, I have an idea. I have started work on it myself, but sinc...