today morning, unlike the last few days, I woke up with a sense of peace. it was like the feeling of seeing the sun when the clouds part after a thunderstorm.

I woke up with the feeling that whatever happens, happens for the best. that I've been sweating the small things so much that I've lost sight the big things. that it doesn't matter if I choose pork vindaloo or pork sorpatel for the menu. or if shruti and i can't jive (we still can't, yet!). or if my tie doesn't perfectly match my shirt. or any number of other things.

life has never been perfect. we are far from perfect. how can our wedding be perfect?

maybe perfection isn't absolute. maybe, just as I regard my life so far to have been perfect in the sense that I don't want to change anything about my past, the next two weeks, the big day(s) - yes, there's two of them - and life after that will also be perfect in hindsight. 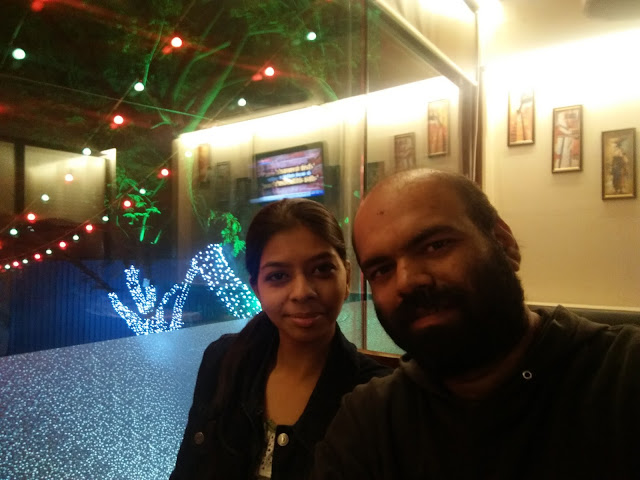 at December 09, 2016 No comments:
Email ThisBlogThis!Share to TwitterShare to FacebookShare to Pinterest
Labels: moBlogged, my life, relationships, self realization, wisdom

(forgotten in my drafts from mid December - better late than never!)

my bike's been giving trouble lately. she's spent the better part of the month parked at the garage, getting the equivalent of a heart transplant: new crankshaft, connecting rods, bushings, piston, block, timing chain, tensioner, clutch plates, and all variety of minor paraphernalia. so, while I waited it out patiently for fate and my mechanic to give me some relief, I've been living off public transport and the generosity of my friends who have lent me their rides whenever they could.

the last few days were with ajith's avenger. his was the bike I was the most excited about borrowing, as it was one of the options i considered long ago (when I was looking for the next bike after my pulsar, before I decided on the karizma). back then, I rejected it as I was sick of bajaj's quirks: some touches of bad design, and a reputation for bad longevity of the engine.

after a pretty successful run with the karizma, I've been thinking about my next bike. and i decided to approach the avenger with an open mind: it's been 4 years, and bajaj has done intresting things with the pulsar platform, so i figured getting my legs around it should give me the feel of things.

before I mounted it, I was nervous. after all, I had to ride it from powai to bandra in the peak of rush hour traffic, and i had an impatient lady waiting for me at the end of it. and yes, she was already done with her stuff and was killing time until I arrived. my main concern was the position of the foot pegs... would I be able to handle switching to feet on the ground from feet on the pedals quickly enough?

once on the road though, I was quite reassured. it was possible to get my shoe caught on the gear lever or get my ankle on the silencer when switching, but with enough care it wasn't a problem.

the riding position had its pros and cons: it seemed more relaxed, and having mirrors and other cars' headlights at eye level meant that I had a good all round view. the low seat made me almost feel like I was in a go-kart, and that made me feel like I was going a lot faster than I was. the engine was nice and smooth. the gears were so unlike the karizma that it almost felt like my foot was doing its job by itself and I was riding an automatic! the gear lever was too long though, so I ended up using it as a toe shifter only. old habits die hard, I guess. I reached my destination comfortably and without incident, and on the way home, my lady was also happy to ride pillion.

the next morning, riding to work without much traffic, I had a chance to explore the handling better. and that's when I was truly worried. the bike brakes scarily. it skids on light braking on tar roads in a straight line... at 60. on curves, anything less than a perfect surface is scary at best. that would have been a deal breaker, but I got a second opinion from a die hard avenger fan, who said the same thing: the avenger brakes and handles terribly. his "technique" was to ride slowly and use engine braking. lol.

anyway, I still had a couple of days more to go, and one important errand: transporting a rather heavy bit of luggage across town. the avenger handled that perfectly, with my fully loaded rynox (64L) saddle bags, a packed 90L backpack, and a pillion. the seat is roomy, so it doesn't feel cramped even with the huge backpack and the pillion. full points there. but I realized during the 3 hour ride that the seating position actually puts your weight on a weird part of your butt. I didn't have any aches at the end, but it did get rather uncomfortable.

my next bike? uncheck.