it's been exactly half a year since shruti and I took the biggest step of our lives. the memories are still as fresh as ever.
but scratch the surface, and things have changed over these months. we have gotten attached to our home. to each other. to our way of life. it's a sort of passive-aggressive attachment, where we welcome time apart (after 5 months of literally no time apart), because our time apart reminds us of how inextricably attached we've become.
we have grown on each other. I have fallen in love with her dal khichadi (with the occasional addition of bacon), and she has started adding schezuan sauce to pretty much everything. I can't sleep without her embrace, and she has gotten used to my perspiration. fart jokes have lost their charm. we haven't perfected our tea recipe to the point where we both enjoy the result, but we're getting there.
we're rediscovering each other, peeling off the layers, and changing things as we go along.
it's surprising how much can change in just half a year.
it's fascinating to imagine what lies ahead. 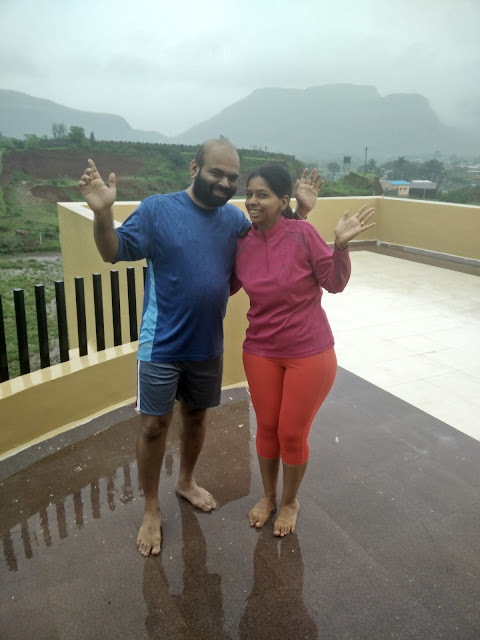 at June 25, 2017 No comments:
Email ThisBlogThis!Share to TwitterShare to FacebookShare to Pinterest
Labels: moBlogged, my life, photo, relationships

it was a lazy afternoon. we were in this spacious house/apartment, and everyone was taking a nap or lazing around in bed. Clive and I were in the lower half of a king size double bed, the sort made of ancient, heavy wood.

we were watching a movie on his laptop. the movie was titled "wag the dog". the movie was about a struggling musician who inspired another guy to learn to play the guitar. the inspired guy became a famous musician, and one fine day, the guy who inspired him (let's call him *x*) turned up anonymously to watch one of his performances. after the performance, he went up to the now famous musician (let's call him *y*) and reintroduced himself. *y* remembered him and thanked him for the inspiration. *x* was very curious about his unique playing style and asked him to play a solo piece for him. as soon as *y* started playing the role *x* realized that he was only pretending to play the guitar, but was actually using a touch sensitive sensor on the back panel of his iPhone. this agitated *x* and he considered it an affront to his musical legacy. there was a tiff, which ended with *x* smashing the guitar on *y*'s head, to assess from the sound whether it was a real guitar or not. the guitar was real, and the movie ended.

Clive shut his laptop, and I got out of bed and walked to the other room. sunil and a lady were in one bed, shruti was in another, and suraj was in the third bed. they were discussing something when I walked in, and I told them I just watched "wag the dog". they asked me if I liked it, and I told them it was brilliant. they all chimed in with their own appreciation of the movie as well.

shruti suggested we go for a ride. we stepped out and got on the bike. we were riding to CST railway station, which was a straight ride down a highway, which looked more like marine drive than any other highway. only differences were that there was some sort of construction work (metro work?) underway along the median of the highway, and the opposite (i. e northbound) side had a broad, landscaped garden between the road and the sea face.

somewhere on the way, a cyclist darted across the highway from behind a rickshaw, and nearly missed colliding with us. I chided the cyclist, and we resumed our ride. we reached CST railway station.

the road ended at a grassy quadrangle which was bordered by a single lane tar road on all 4 sides. on the right of this road was the railway station and tracks, while on the left, there was the ticket booking counter. straight ahead, was a stone building which had the entrance to the station. I parked the bike, and we stood in line for a platform ticket. there was a guy in front of us in the line, who had a huge backpack on his back. he walked away from the counter, and I was about to buy our platform ticket, when the person at the counter started calling out to him as he had forgotten to collect his ticket. I called out to him as well, and he turned around just then. the person at the counter said that in addition to the platform ticket, he also had a special permit to carry a fossil across the bridge. he handed me the ticket and permit to give to the guy. the permit was a piece of paper, with a t-rex hand drawn in blue ballpoint pen.

I handed him the ticket and permit, and got back to the counter to get my own ticket, only to find that someone else had gotten ahead of me. the person ahead happened to be another friend, Elizabeth, and she was buying a monthly pass for the platform. she nodded at me without saying anything while the person at the counter prepared her pass.

for some reason, I changed my mind about the ticket, and decided to return home. but strangely, I was looking for my folding cycle instead of my motorbike. and I couldn't remember where I had parked it. I thought I had chained it to a tree, but there was no tree in sight.

and that's when I woke up.

at June 14, 2017 No comments:
Email ThisBlogThis!Share to TwitterShare to FacebookShare to Pinterest
Labels: arbit, friends, my life, sleep, stories

married life and domestic chores have sadly taken their toll on my travel and riding schedule, and I've actually been city-bound for an unprecedented 7 weeks! I decided that enough is enough, and it's time for a ride and a bit of camping. solo, if it came to that.

and then, two nights ago, I had this dream.

in the dream, I rode to malshej, solo. I reached late in the afternoon, and the lake where I usually camp at had risen significantly due to the recent rains. while my usual spot was above water, the two paths to approach it were submerged. I was inexplicably dogged about camping at my usual spot, despite the risks involved in getting there (and more importantly, getting back out). I attempted to get to the spot by both paths, but had to give up as the water got too deep and I got nervous about missing the path and taking a dive with the bike into the lake. back out of water and on the path (the paved one), I parked my bike and lay on the tarmac for a quick nap. it wasn't sunset yet. I hadn't even pitched my tent.

turns out, I slept so soundly that I awoke the next morning! it hadn't rained, and I was still in the open, my bike next to me. I checked my phone.

it was monday morning. i was supposed to be at work!

next thing I knew (yes, there's a missing segment of my dream), I was in a state transport bus, on the front jumpseat, next to the driver. we were descending malshej ghat. and i suddenly remembered that I had ridden to malshej!

after another missing segment of my dream, I was back home in Mumbai, getting ready for work.

the only weird thing was that, this house was quite different from the one I live in! still, my wife was there, and I started telling her while she was getting ready for work, about how I forgot it's Monday and how I forgot I had gone by bike. I packed my lunch, showered, dressed, and was getting ready to leave (my wife had already left for work by then). that's when my mom in law turned up. I was alone at home, and i couldn't refuse, so I sat her down (yes, for some reason we sat on the floor in the kitchen) and we made small talk. that's when I mentioned that it's 10am, and I'm already late for work and had to go. she didn't believe me though, and said that I'm trying to wriggle out of talking to her.