i have barely blogged for almost a month now. here's what's been happening in the meantime:

went to the kala ghoda art festival with a good friend, meet a few tweeters out there, then headed to a bar near shivaji park and drank till midnight or so. hung out in the park till 4am, then met another friend and biked to lonavla. trekked a bit too. quite an awesome 24 hours, in all...made even awesomer by the fact that no love was involved!!! ;)

had an amazing 2 day trek (which also spilled into the first night - my first night rappelling stint!!!) with an overnight camp in the valley. ended with a swim in a dam. my hardest and longest (and hence, best) trek so far. too lazy to post any photos yet. will probably do a double feature sometime next week. 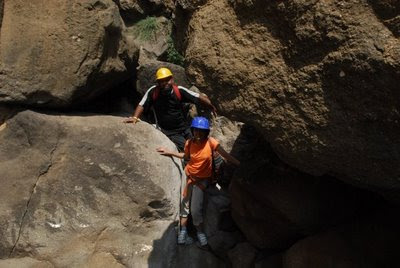 i'm officially a twitter addict now. mainly thanks to pocketTwit, which works on my phone like a charm. it also drains my phone's battery like mad, so i'm usually offline and unreachable within 6 hours of leaving from home. combined with my poor memory and absentmindedness when it comes to charging my phone, it typically comes down to 3 hours. still, that's a small price to pay for having my life documented for posterity (i hope) on twitter.

my 2-month-old ipod reboots constantly. initially it was due to corrupted data (winamp was screwing it up). switched to itunes, and the problem disappeared for 2 weeks. it's back with a vengeance now. and it's pissing me off!!!

i have quit alcohol for lent. for the first time in my life. i don't know why and i don't even know how...but now that i've embarked upon it, i'm gonna see it through. i'll be quite drunk on easter though :P

went for a company-organised walkathon in aid of concern india last weekend. walked 7km without breaking into a sweat. (okay, the sweat was due to the sun, not the walking :D). photos to come later. could i actually be getting healthy? i wonder!

hmmm, guess there's nothing more to mention. i have a few secret updates too, but they're gonna be kept off the blog :P
at March 03, 2009
Email ThisBlogThis!Share to TwitterShare to FacebookShare to Pinterest
Labels: bike, friends, living the dream, my life, photo, tech, travel

wow man that is a lot of stuff . did you trek with any particular group?
biker
charity
trekker
Gonna make you my role model :)

thanks bud. but seriously, don't make me your role model. just find your own path and take it. life is to awesome to be following someone :)

oh and i trek with campfire india, but that's only because i don't know of any other groups :)

Saw u on Valentine's Day at KGAF. But didnt talk to you... simply...

Giving up alcohol for Lent? Good... I plan to meditate and give up grumbling for the next 40 days... (its not working!)