i passed through churchgate station a couple of days ago. not many things seem to have changed since the last time i was there, a few months ago. the biggest change was that the ages-old railway canteen had vacated, and in it's place was a brand new burger joint. and a really cool one too.

it's called wimpy. that's right. i have photographic proof. 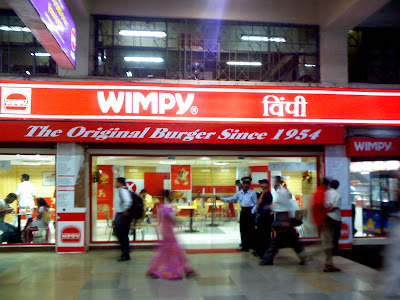 now that's a cool new market to tap into. does the idea of eating at mcdonalds or burger king scare you? it's now ok to be a wimp. you can eat at wimpy. :P

btw, while i was clicking that pic, a greying woman actually got over her wimpiness and asked me what i was doing (that too, in the most menacing kind of way). she scared the hell out of me. i almost made a dash into wimpy before i realised i wasn't hungry. i did the wimpier thing and ran out of churchgate station.
at January 18, 2008
Email ThisBlogThis!Share to TwitterShare to FacebookShare to Pinterest
Labels: humour, observations, photo