... and the art of motorcycle maintenance

i woke up two minutes before my alarm today (6:28am, beat that!) and got ready for work with time to spare for the office bus, but when it was time to leave, i realized i was so sleepy i might not be able to function if i didn't grab another hour of sleep in bed (as opposed to the office bus, where i usually simply toss around, half awake)

i was at home. there was a bike, placed upside-down on some sort of stand. it was an orange and black duke 200. the stand was interesting. it looked something like this: 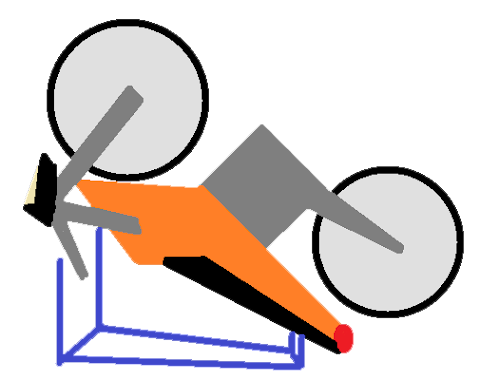 (yeah, the blue is the stand.. and yeah, i drew this in paintbrush :P)

anyway, it's kinda strange, considering that i live on the 1st floor of my building, and there's no way a bike would have made it up the stairs, but i guess dreams don't care much for technicalities :D

so i was doing some sort of maintenance on the bike (oiling and greasing stuff, i think), and then wiped it down with a dry (microfiber?) cloth. while wiping it, i noticed one side of the fork was orange while the other was grey, and concluded the paint had been scraped off the grey side.

when i was done, there was some sort of weird sprocket wheel left over, and i didn't know where on the bike i had to reattach it. i also noticed that the left handle's lever was moving freely, disconnected from whatever it was supposed to be connected to (it should have been the clutch, but somehow in my dream it was the brake)

since i guessed the missing sprocket was the reason the front brakes weren't working, i tried fitting it there. tried it in all sorts of clearly unusable positions, before i decided that wasn't it. i clicked a photo of the sprocket with my phone and tried using it for an image search (yeah, not sure how that was supposed to help either). finally, i gave up and flipped the bike back on its wheels (much like i would flip my bicycle over after repairing it) and plonked it right on the ground without so much as a thump.

that's when i realized why the brake wasn't working... it was a disc brake, and the brake hose was a transparent rubber tube, and there was clearly a huge air bubble in it. i tilted the bike while pumping the brake, and (inexplicably) got the bubble to the top of the hose. a bit more pumping on the lever and the bubble mostly disappeared.

i then thought the sprocket was from somewhere around the rear brake. but then a quick glance revealed that the bike has disc brakes at the rear as well.

that's when my second alarm went off. 8:15am.
at May 09, 2013
Email ThisBlogThis!Share to TwitterShare to FacebookShare to Pinterest
Labels: arbit, bike, sleep, stories